Plant description: It is a deciduous tree that can reach a height of 15 m. The leaves are alternate, wide, with roughly jagged edges, bright smooth and light green above and whitish below. The flowers are small, green, growing in clusters and hanging in catkins. It produces several small, white or pinkish-violet fruits, together in a central axis,that are similar to blackberries. It is estimated that there are approximately 100 different species of mulberry, but only three species are mainly grown, due to their economic contributions and benefits for human consumption.

Origin of China, the leaves of the mulberry serve as food for the silkworm and as medicine In Mexico they are planted for the consumption of the fruit, food for animals and also medicinal use. 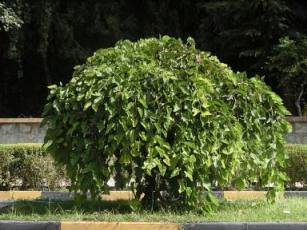 Cultivation: It is a tree that must be planted in full sun. It prefers a warm, moist, well-drained loamy soil.

The multiplication through seeds is not the best way since the seeds have a relatively low germination power (50%), but it is a good idea if you want to obtain new varieties of mulberry with new characteristics. Sow the seeds as soon as they are ripe in a cold frame. The seeds should be arranged in a low pot or seedling, with sand or clay substrate and organic matter that must constantly be moist. Germination of fresh seed may vary because some seed will contain dormant embryos and impermeable seed coats.1 After germination, the seeds require half shade for a few weeks.

It is very easy to reproduce by cuttings. Cuttings are taken from young branches that are 6 months to 1 year old. Each cut should be between 15-20 cm in length with three buds. Simply put cutting in good soil at six to nine centimeters deep and 4 m. from each other as the plant needs lots of room to grow. Keep them moist and warm. After about a month when the buds have shoots, they are taken out and planted. SInce they have brittle roots they need to be handled with care when being planted.
In general they do not require too much water, but constant watering is recommended, they can tolerate droughts. Pruning should be done in the winter when the plant is fully dormant. Only badly placed branches or dead wood should be removed during pruning.

With maintenance pruning, cross, diseased or old branches are eliminated, and it is recommended to do it every year, but be careful not to do excessive pruning, as they could cause growth problems for the tree.
If its fruits do not grow well or do not grow, and the leaves turn yellow, the tree is stressed. Having it irrigated frequently and adding a fertilizer will resolve the problem.

Uses: Its fruits are good to eat and make water. Leaves help in some diseases such as colds, diarrhea, dysentery, high blood pressure, and cough. It is also refreshing, emollient, soothing, digestive, and a laxative.
The branches (stems) have an antirheumatic, antispasmodic, diuretic, hypotensive and pectoral effect, and are often used to reduce water retention and for rheumatic pains and spasm in the upper limbs. The bark is regarded to have anthelmintic and purgative properties and is used to expel tapeworms.
Mulberries have a high iron content which can help increase the production of red blood cells, which improves the distribution of oxygen for each cell in your body. Medical studies have been conducted and found it helps to prevent the accumulation of fat around the liver. In addition, mulberry is also considered beneficial for people with diabetes.
Leaves have high protein content thus being used as feed to animals - fresh, dry or in form of flour.2

Pests and diseases: In general, mulberry trees are not affected by pests, but there are two diseases that do affect them. One affects the fruit, the other the leaves. White balls similar to popcorn will form on the fruit. The other produces spots on the leaves and curl. The only solution is to cut and burn the affected parts.