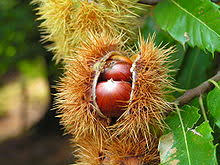 Climate: Cold and temperate. Chestnuts produce a better crop when subjected to cold temperatures during the dormant period

Plant Description: Deciduous tree that can reach 35 m in height. It can be found at altitudes between 200 and 1000m.

Cultivation: The seeds germinate in late winter or early spring, but the lifespan is short. If kept moist, they can be stored in a cool place for a few months, but should be checked regularly for signs of germination.

To keep them cool for a few months without artificial cooling, the chestnuts can be soaked in cold water for about 20 hours immediately after harvesting, after which they are dried in the shade, then placed in layers of dry sand.

It grows best in direct sunlight. Optimal rainfall for chestnut trees is 800 mm or more, ideally in even distribution throughout the year. Once established, they resist drought well. Chestnuts grow best in soil with good drainage and adequate moisture. It prefers deep and sloping soils. 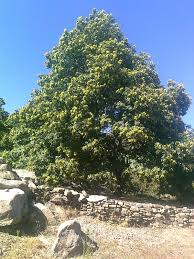 Uses: Other than being consumed fresh, chestnuts may also be canned, pureed, or preserved in sugar or syrup.

Pests and Diseases: Root rot is caused by the honey fungus. When planting chestnuts, it is best to avoid newly cleared soil to help resist this fungus. The disease is more common in heavier, poorly drained soil types. The larvae of the polyfolia (Phytomyza horticola) are the species that cause the most damage to shoots and foliage.