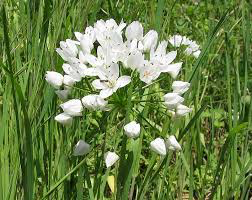 Plant Description: Garlic is a perennial plant. It has long, thin, flat leaves that grow up to 30 cm. The head or bulb has white skin and is divided into segments called cloves. The heads may have between six and ten cloves that have a thin white or pink skin. The flowers are white.

Cultivation: Garlic grows well in full sunlight. It requires frequent watering until the period before harvest. It needs well-drained, somewhat clayey soils, which are rich in organic matter and moist. It can be grown in soil previously used for cereals.

New plants are grown from the cloves, which can easily be germinated. Depending on the type, the bud begins to emerge about three months after harvest. To sow garlic, you have to loosen and fertilize the soil, plant the clove and then press the soil a little to make it firm. Cloves are sown about ten centimeters apart and about three fingers deep, during the cold season. You should stop watering about two weeks before harvesting. It is harvested four or five months after sowing when the leaves are already yellow or brown. The soil around the plant is loosened and it is pulled up by the leaves. You then have to clean the heads well of dirt and leave them for several days in a dry place so that they lose moisture. It is advisable to keep about three good quality heads for future planting.1

Uses: Garlic has a strong aroma and a spicy flavor and is used to accompany a range of dishes. The tender shoots of the leaves are eaten as well, although consumption of the head is much more common.2

Garlic is used extensively in modern medicine and also in traditional medicine. It is used to avoid blockage of the arteries in the control of heart disease; it lowers blood pressure and cholesterol; it increases the level of insulin in the body; controls damage caused by arteriosclerosis and rheumatism. It is also used for the prevention of certain types of cancer. It helps with certain complications of diabetes mellitus, and relieves stress and depression.

In traditional medicine it is widely used to combat intestinal parasites and amoebas. The raw bulb is used orally, on an empty stomach, or mixed with papaya seeds. It is also used in digestive disorders such as stomach pain, flatulence and constipation. For the treatment of rheumatism, the raw bulb is eaten or rubbed on the affected area, mixed with alcohol and tobacco, or it can be taken orally with tobacco and rue. Let it rest for two days. For skin problems such as chilblains, scabs, scabies, ringworm, and pimples, the bulb or stem is crushed and applied as a poultice. It is also used for spider bite, ant sting, or scorpion sting. Garlic has antifungal properties and is used to treat vaginal yeast infections by applying a raw garlic clove to the inside of the vagina.

It is also used in respiratory diseases such as cough, angina, asthma, sore throat, hoarseness and bronchitis and for general pain such as back, head, muscle and earache.

Garlic is also very useful in agroecology. With a mixture of water, alcohol and chili, it serves as a repellent against aphids, larvae and chewing insects. It can be planted as a repellent alongside tomatoes, and can eliminate or reduce soil problems if planted for one or two seasons.3

Pests and Diseases: The pests and diseases that affect garlic are the same as those that affect the onion. The main pests are the onion fly, ringworm, weevil and moth. It is also affected by downy mildew and garlic rust.