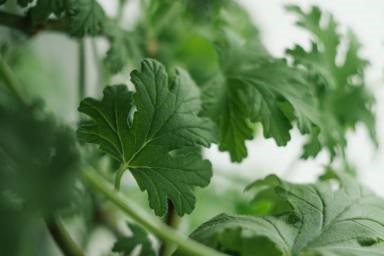 Plant Description: The plant is 60 - 90 cm high with a spread of about the same width. It is a scented geranium that is robust, grows vigorously and is a great choice for hot dry locations in the garden or for large containers on the patio.

It is called citronella, but it's actually a citrus-scented geranium. The mosquito plant is a species that in particular has a distinctive appearance due to its medium green, lacy - weblike pattern - leaves. It produces delicate pink to purple flowers that are abundant during its blooming season.

Cultivation: It is sown in direct sun, but tolerates partial shade. It grows in a wide variety of soil types, but prefers fertile, moist, light and well-drained soils.

It is planted in the spring season (March, April, May) seven to nine centimeters apart. Keep the soil moist after planting. Once established, mosquito plants in planting beds should survive the rain.

During its growing, remove dried or yellowed leaves. Deadhead flowers to increase blooming and pinch the stem below the node to encourage your plant to grow in a bushy habit. Fertilize once a month during spring and summer and every other month during the fall and winter. In containers, provide the plants with no compact light soil mixed with natural fertilizer, plants need watering when the soil is dry. follow the same rules regarding fertilization and plant growing.

To propagate the plant do it during the late summer months. Set a pot filled with potting soil beside your plant. Bend one of the stems gently toward the pot, being careful not to break it. Bury the stem sideways at a point at which a leaf is attached, keeping the growing tip uncovered. Place a rock over the buried stem to hold it in place. After a few weeks, roots will emerge from the stem and grow into the potting soil. At the end of the season (and before frost), cut the stem free from the mother plant and move the new young plant indoors for the winter.

Select mosquito plants at any point during the growing season by collecting individual leaves or leafy stems.

Uses: Lemon-scented, they keep an area of up to 10 square feet virtually free of mosquitoes. This herb has such a strong but unproven1 reputation for repelling mosquitoes particularly during the hot summer months. So in order to reduce the incidence of malaria, dengue and zika, the repellent properties of citronella make it a good companion plant for humans.
Inhaling an infusion of crushed leaves of citronela helps to eliminate fatigue, alleviate headaches and improve energy levels.

Pests and Diseases: The mosquito plant is generally free of pests.