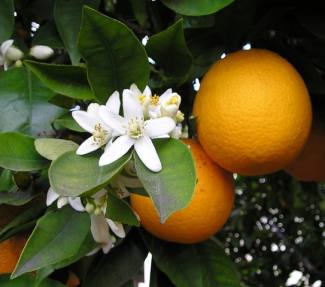 Plant Description: It's a tree that belongs to the genus Citrus. Its size is medium, from three to five meters high, although in optimal conditions it grows up to 13 m, with a rounded crown and regular branches. It has a single trunk, straight and cylindrical, greenish first and gray later. The branches appear about one meter from the ground. The branches sometimes have large spines. The leaves are perennial, medium and elongated, with a rounded base and pointed ends. White and fragrant flowers appear in the axils of the leaves, they can grow solitary or in clusters. The flower has masculine and feminine characteristics or in other words, everything necessary for the production of a fruit. Its fruit is sweet orange.

Cultivation: It should be planted in full sun but in the place that has protection from the wind. Plant during the rainy season. The ideal temperature for orange cultivation is between 23 to 32 ° C. Orange tends to grow very well in various soil types, however they grow best in well-drained, sandy, and clayey soils.1 Orange trees need room to spread, at least 4 meters away from other trees or houses.
It can be reproduced by seeds or by grafts. While some varieties can grow when planted from seeds, most people use grafts for orange cultivation. This is because trees grown from seeds take longer to produce fruit. They also have a short shelf life because trees get sick more often and their roots can rot.
Grafting: The grafting is done when the plant is in active growth. Because in this state the bark can be raised properly. Cut the leaves and thorns that are below the graft that will be placed on the plant. Then, use a knife to make an inverted T in the bark of the stem. Lift up the cut bark to allow the graft in. It is important that the stem used to remove the graft comes from a trusted source so as to make sure it is free of pests and diseases. Cut off part of the stem bark where one of the buds is kept. Place the graft on the plant fixing it firmly and wrap the area with plastic.
Terminating, put the plant in a place in the shade and wait 3 weeks for the wound to heal. After 3 weeks the plastic is removed. The graft will be completely attached to the plant. If successful, the graft will still maintain its green coloration. Cut the top of the plant a few centimeters above the graft, in order to leave it hanging but without removing it completely. After 5 weeks of graft growth, the cut part can be completely removed. At the same time place a sturdy wooden post and cut the apical dominance, removing the terminal buds with your fingers. That is to keep the tree fixed protecting it from the wind. Once it has grown enough, plant the orange trees in their final place. A space of 4 meters should be left between each plant and 6 meters between each row.2
Transplanting grafted trees: The hole in the ground should not be deeper than the length of the roots. But it may be slightly wider than the root mass. No need to mix the soil with the compost. Make a small cone of earth in the center of the hole and position the tree so that the roots extend around the cone. Add soil until the roots are covered making sure there are no lumps causing air pockets around the roots. Organic matter or compost is applied to the surface around trees after planting. Plant the tree a little high to allow the tree to settle a little in the hole and to prevent water from accumulating near the trunk. The graft union should be between 10 - 15 cm above the soil surface. A watering ring can be made around the tree to allow water to penetrate the soil indirectly. Fill in the ring twice a week for the first month. Then decrease the watering bit by bit. Water more during hot, dry weather. Fertilize three weeks after planting. And then every 6 months.3 Fertilizer containing a high level of nitrogen: 0.5k- 1kg of nitrogen per year per tree should be used. The first year 1 tablespoon of nitrogen fertilizer, three times a year. 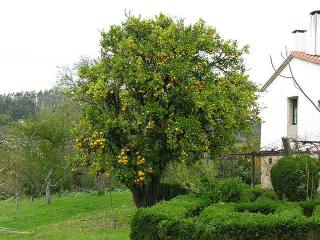 Uses: The fruit is edible and also has health benefits, for example it calms the nerves by preparing an infusion with orange leaves in a cup of very hot water. Relieves problems of the urinary system - when there are discomforts in the urinary system, both bladder and prostate, drinking orange juice will help you fight infections and reduce the possible inflammation you suffer from. It has a high level of vitamin C which helps to strengthen the immune system. Orange also reduces inflammation.
It also has cosmetic use, it is used to combat wrinkles: the orange keeps the skin hydrated, activates circulation and prevents the early appearance of wrinkles. In addition to drinking pure orange juice, it is recommended to place orange slices as a compress for 15 minutes. And for hair that is dry and dull, it is advisable to soak the orange peels in apple cider vinegar, leaving them for half an hour. After that time, we apply the mixture to wet hair and rinse it.

Pests and Diseases: California red scale, Mites, Whiteflies. To avoid pests, we must eliminate the herbs around the orange tree. In addition, make a homemade spray with soap and water and give your tree small "showers." You can also put special adhesive tapes around the lower part of the trunk. To fight against Aphids and Trips - if the pests are not expanded throughout the tree it is enough to cut off damaged leaves or shoots. Then spray with soap and water.