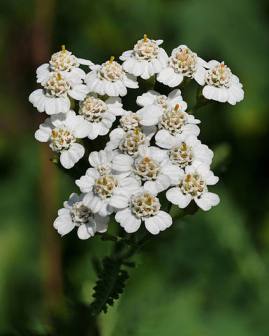 Plant description: Perennial plant 30 - 90 cm tall, with feathery leaves by the stem and clusters of small flowers that can be white, yellow, or pink.
Yarrow is a plant native to the western region of North America, used by indigenous cultures and also has been present in medical history in the traditions of Europe and Asia.

Cultivation: It is a plant that can be planted in direct sun or in medium shade. It adapts to several types of soils, but for a better harvest, plant in light and sandy soil, which has little moisture. Yarrow reproduces by rhizome - horizontal stem of a plant underground, that branches out roots and shoots from its nodes. Plant seed in warm soil, max .5 under cm under so the sun can get to it. It has to be deeply irrigated twice a week to be established. Once settled, it does not require a lot of care.
Yarrow can be harvested by cutting the tops of the plant, leaving a part to reproduce. 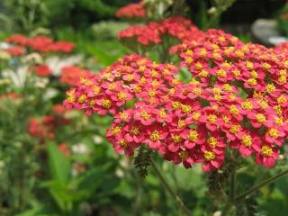 Uses: Yarrow is useful in the stabilization of eroded areas. It grows well in areas disturbed by roads. It attracts beneficial nocturnal butterflies and also repels several pests. Because of its way of attracting pollinators, yarrow is an essential plant in an edible forest.
The flowers, stems and leaves are medicinal and have several uses, taking it as a tea helps relieve the discomfort of the flu, fever and headache. As a poultice it is used to stop bleeding in cases of wounds. Pregnant women should not take it because of the risk of abortion.

Pests and diseases: Yarrow does not have much pest problem, but if the leaves are not allowed to dry, the plant can develop a mold problem.
As it reproduces by rhizome it is a difficult plant to kill.