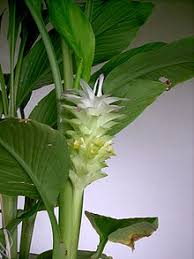 Plant Description: It is a herbaceous perennial, that grows a height of up to one meters with rhizomes or stems that are below ground level, highly branched, cylindrical, yellow to orange, and aromatic. The leaves can grow 76 to 115 cm long. They have a narrow oval shape and grow in two rows. The leaves grow directly from the rhizome, opposite each other and form a false stem. The flowers are up to three centimeters long, bright yellow and trumpet-shaped.

Cultivation: It is cultivated for its rhizomes, which are sown in early spring. To plant, tear a larger rhizome into pieces that have between two or three shoots, or take one that is sprouting. Plant at a depth of ten centimeters with the shoots facing up. Turmeric buds appear approximately two months after planting. For best results, plant in well-drained soil and water frequently until late summer.

Rhizomes can generally be harvested seven to ten months after planting, when the leaves and stems are dry. The harvest takes place at the end of the summer season. It can be used fresh and raw. To dry it, it must first be boiled and then dried in the sun.

It is sown in half shade. Turmeric requires a lot of heat and humidity. Irrigation must be regular so that the soil remains moist. Towards the end of summer, watering should be reduced until the plant loses its leaves and watering begins again in spring. Turmeric prefers a soil consisting of mulch, peat, and coarse sand.

Uses: The whole plant is edible. The roots are boiled, dried, and crushed to produce turmeric powder that is used as a food coloring and seasoning. The leaves can be used to make wrappers for steaming food. Even the flowers can be eaten as an exotic vegetable. It contains healthy portions of iron and manganese.1

It helps lower cholesterol by working with the liver to remove harmful cholesterol from the body. It is an antioxidant and has anti-inflammatory properties.

Tests have been done to investigate its effect on diseases such as cancer, arthritis, diabetes and other chemical disorders. Turmeric has been found to reduce the severity of lung damage from pancreatic disease in experiments with mice.

Pests and Diseases: Due to its pungent nature, turmeric suffers from few pest or disease problems. Diseases occur when there is excess moisture that can result in fungal diseases. If the soil becomes too dry, mites appear that considerably damage the plant. However, it can suffer root rot from excessive watering.