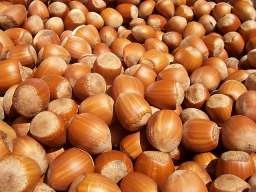 Plant Description: Hazelnut is a deciduous shrub that normally reaches between 3 to 8 m in height. It is  heavily branched from its base. Its crown is very wide and irregular. Its leaves are simple, alternate, medium in size (5 to 10 cm) more or less rounded, with a serrated margin and a little rough to the touch. His nerves are very marked and more or less rough. The petiole is very short and the stipules are oblong, obtuse, green and deciduous. It has male (yellow) and female (pink) flowers separated on the same plant. But it is self-sterile so it requires pollinators. Male inflorescences are catkins up to 9 cm. long, cylindrical, arranged in hanging groups of 2-5. The female ones are dense groups of 8 flowers, which can reach up to 20, they are found at the ends of the lateral twigs. Its fruit is dry, indehiscent,1 globose or ovoid and its shell is woody, reddish-brown in color. In general the fruits are gathered in an infrutescence of 2 to 4 hazelnuts, and sometimes they are presented by only one. The root system is shallow, fasciculate and very extensive.

Cultivation: It is necessary to plant together at least two different varieties of hazelnut. It improves pollination and the formation of seeds and fruits. It is important to check the pollinator compatibility of the trees you want to grow to ensure a good match. The varieties must bloom at the same time to ensure pollination. It requires average temperatures between 23ºC to 27ºC during the day. It withstands temperatures down to -8ºC.
It grows in full sun. It is recommended to plant in a place where it does not compete for light with other trees because its crown expands greatly multiplying its leaves and branches. It adapts to various types of soil, but the most favorable soils are: clay-silty, silty-clayey, and sandy-silty. It prefers soils of medium texture, which have good drainage and oxygenation characteristics.
Hazelnut multiplies by seed, stems, layering.

Propagation by seed - seeds need to be stratified for 120 days in the refrigerator. They will germinate there. Prepare pots of 13 cms. diameter. Fill with cultivation substrate and water. Sprinkle copper or baking soda to avoid the proliferation of fungi. Water and place a seed in the center of the pot. Add more compost and lightly compact the soil. The first seedlings will come out in the spring, but you don't have to go to the garden to plant them until the roots come out through the drainage holes that are in the pot. Prepare the soil a few weeks before planting. It is important to even its texture by breaking and removing stones or breaking organic matter. It is important because the production of the roots is superficial, rather than deep. Add the compost and mix it with the soil - this will promote rooting and good tree growth. Once the soil has been prepared, make holes about 40 cm wide and deep. The distance between the trees should be 3-7 meters apart. Plant the seedlings and cover with the soil. Water frequently but with a moderate amount of water during the first weeks. Then when the earth looks dry.

In propagation by simple stratification, a part of the plant that is still attached to the mother plant is rooted. One-year-old shoots on a stool (stump from which the stems are produced) are bent into an S-shape, so that a curve is under the ground where roots can form. The tip end of the stem is left above ground to continue growing to form the new tree. The best season for layering is when new leaves begin to appear on the tree. If the shoots break when you bend them to the ground, it is still too early for layering. Keep loose soil around the main stem of the tree. Select a branch that grew the previous season. Peel all but the top leaves, leaving about 30.5–45.7 cm from the tip of the stem.2 Open a slot in the ground with a shovel to the maximum depth of the shovel blade. Bend the stem and twist it slightly to the side as you put it in the ground. Keep the stem in place by stepping firmly into the soil on top of the buried section. During the summer, roots will form on the part of the stem underground, and new shoots will grow from the mother plant to stratify the next year. In late fall or early winter, after leaf drop, cut the stem into layers of the main stem. At this time, prune off the broken roots. It can be planted directly in the ground or in the pot. The potted plants are transferred to the ground annually.

Pruning is very important in hazelnut cultivation. The goal pruning is for a single stem to develop. This helps with better productivity, tree health, development of a strong structure, and facilitates fruit harvesting. Pruning should be done during the dormant period (autumn-early spring). Structural pruning for the first 4 to 5 years. Maintenance pruning from the fifth year.3
Hazelnut bushes will generally produce their first nuts in their fourth year, although they won't reach full nut production until year nine or later.

Harvest when the fruit has fallen from the trees. To avoid losses from animal predation the nuts should be harvested as soon as they are released in their shells. In some plants, this can occur when the husks are still green and wet, while in others it may not be until they are brown and dry. In general, if the bunches can be easily plucked from the bushes, they are ready to harvest.

Uses:It is used in confectionery. It has multiple uses in the kitchen in the form of oil or sauces. It is rich in protein, unsaturated fats, manganese, copper, vitamin E, thiamine and magnesium. Hazelnut consumption helps strengthen the heart and in cancer prevention.

Pests and Diseases: Leaf winder, archips rosana. It causes the leaves to curl and damages the fruit shoots. This is caused by a brown butterfly with its green larvae, which feeds on hazelnut leaves. Solution: apply insecticides at the beginning of sprouting.

Aphids. They feed by sucking the juices. It attacks young shoots and branches and the substance it secretes burns the foliage. His attack causes the harvest to be reduced. Solution: use active ingredients of Lindane and Benfuracarb.

Nut weevil, curculio nucm L. This pest greatly damages the fruits. This beetle begins by feeding on the leaves while the hazelnuts are not formed so that, just after their mating, the female lays the eggs in the fruit. Solution: collect the insects by shaking the trees and having previously placed a mesh just below. You can also remove the affected hazelnuts or use active material such as sulfur.

Lesser bud moth, recurvaria nanella. It is a lepidopteran, whose larvae live in the bark of the hazelnut trunk. As adults they attack the buds and leaves, seriously damaging the production of the fruit. Solution: oil-based treatments to remove eggs and larvae.4