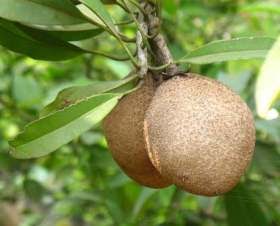 Plant Description: Evergreen tree 5-20 m high, although it can reach up to 40 m, and in diameter up to 150 cm, with a straight, cylindrical trunk, with grooves at the bottom. Its crown is wide, low, and dense, with many thick and horizontal branches. Lenticellated twigs, with many scars from the fallen leaves. Bark is brown with grayish spots, it is   in the form of mesh, and exfoliates in rectangular plates. The inner bark is pinkish-cream; fibrous, and bitter. The bark exudes a sticky white latex. The leaves are simple, alternate, elliptical to oblong, with a sharp or obtuse tip, smooth, and grouped towards the tips of the branches. The tree has white, aromatic, bell-shaped flowers. The flowers are pollinated by bats. The leaves are solitary and axillary, with pedicels of 1.4 - 1.7 cm and a corolla that is 1 cm long. The fruits are round, ovoid or globose berries up to 10 cm in diameter. They are rough, brown to reddish-brown when ripe; the pulp is reddish, fleshy and juicy, very sweet with milky sap. Each fruit contains between 5 and 12 flattened seeds, brown to black in color, smooth, shiny, arranged in a star, with a wide white or creamy thread. Seed dispersal is carried out by birds and large mammals, such as the Saraguato monkey and the tapir; also by fruit bats.

Native to Mexico, Central America, and the Caribbean.

Cultivation: Full sun. It grows in various types of climates from the humid tropics to the dry and cool subtropics; but they prefer a warm and humid climate. It prefers daytime temperatures between 20 to 34 ° C., but can tolerate temperatures of 11 to 42 ° C. It does not withstand frost.

It is not very demanding on soils, it grows calcareous, rocky to light clayey, saline and infertile soils. But the best soils are loam, deep, well drained, and rich in organic matter. There are places where it grows in deciduous forests, with moist soils. Very tolerant of dry conditions. Established plants are resistant to drought, they also resist strong winds and moderate levels of salt in the soil.

It can be reproduced by seeds, or by grafting.

Propagation by seeds - Choose large seeds from large fruits. Sow in the place exposed to the sun, in fertilized soil with good drainage. Sow at a depth of 2 - 3 cm. Push the seed into the soil two centimeters deep and water well. They germinate easily after about 30 days without any treatment and with a success rate of up to 80%. The tree will take between 5 to 8 years to bear fruit.

It can also be sown directly in seedbeds and then transplanted to the nursery. The seed is sown in furrows spaced 10 cm apart, the sowing depth is 2 cm, trying to be covered by one cm of soil or substrate.

In preparation for a permanent site, the land should be plowed to a depth of 30-45 cm and then properly leveled before planting. Initially, only a 4 x 4 m distance is maintained between the plants. After a few months you have to remove the weaker plants and leave stronger ones to grow. Allowing a distance of 6 m between the plants. It is possible to space relatively short distances if you are planning to prune the trees. You can leave them at a distance of 4.5 m. If you don't plan to prune, leave the distance of at least 6 m. between the plants.

Propagation by grafts. Seeds for rootstocks are sown in a sandy seedbed, at a distance of about 2 cm and at a depth of about 1 cm. The seeds germinate in about 30 days. After a few months, the seedlings are transplanted into plastic bags. They grow very slowly; even if stimulated with nitrogen applications, it takes 2 to 3 years before they are ready for grafting.

Branches 45 to 60 cm long, and 1 cm in diameter, that contain 5 to 8 pairs of leaves are placed in an air layer. Stems are obtained from young terminal buds that are approximately the same size as the stocks. The vines are grafted veneered by longitudinally removing a section of bark that barely cuts the wood. The stem is prepared to adapt to this cut by cutting the bark and wood in the same way. The stem is then fully wrapped and covered with a plastic strip that allows free gas exchange, while restricting perspiration and dehydration. Thirty days after grafting, the plastic is completely removed and the top of the broth is cut away leaving only two leaves. Traps with scions that failed to develop are re-grafted as soon as possible. When the stems have grown from 15 to 20 cm. the remaining section of material is cut at the graft junction and the new growing shoot is tied to a formation stake.

Fruiting begins five to eight years after sowing and occurs twice a year, although flowering can continue throughout the year. Fruits take about 4 months to ripen. Trees reach their peak harvest around 30 years. 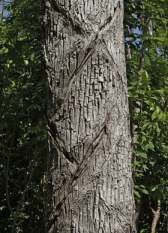 Uses: The wood of the sapodilla tree is used in the manufacture of handicrafts and musical instruments. Due to its quality, strength, durability and hardness, it is used in rural construction works; in making fence posts, planks and tool handles.

The latex produced by the tree is used to make adhesives. It is also used in the production of chewing gum, and for the preparation of waterproof paints and varnishes, and electrical cable insulators. The tannins from the bark are used to dye hides and other materials.

In traditional medicine the fruit is used to make poultices against liver inflammation. The bark and leaves have astringent properties. The powdered bark infused with honey is used as a febrifuge. The powdered seeds are used against poisonous animal bites, and mixed with water they are taken as a diuretic. The decoction of the leaves is taken for fever, bleeding, wounds and ulcers, and applied in compresses against neuralgia. The decoction of old yellowish leaves is taken against cough, flu and diarrhea. In Mexico, powdered seed infusion is used as a sedative.