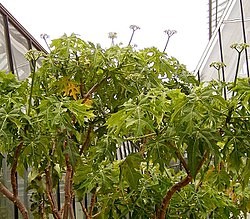 Plant Description: It is a shrub with soft, flexible and woody stems, between 3 and 5 m tall. It grows in warm sub humid climates, from 0 to 1000 m asl. It has thick white marrow and semi-gray or greenish stems. Its stems and leaves have sharp hairs. green leaves, alternate, and deeply lobed palmate. They are large, up to 32 cm long and 30 cm wide. The chaya petiole is long. Its open, axillary inflorescence is held on the upper leaves. The flowers are unisexual. The female flowers grow on the branches of the lower summit and they open first. The male flowers are on the branches of the posterior and final summit. White flowers mostly bloom in the summer months but it is possible to see them all year round.1
Chaya originated in the Yucatan peninsula.

Cultivation: Chaya is most productive when grown in full sun in fertile soil. It thrives in well-drained soils, still humid soils. It is tolerant of heavy rains and resists drought. It tolerates lack of care.

It is propagated by cutting herbaceous and semi-woody cuttings 1 to 3 cm in diameter, and 10 to 80 cm in length, while trying to preserve a piece of stem. The cuttings are cut and buried horizontally in the ground during the dry season to avoid rotting of the roots. The distance between the plants should be 80 cm and one meter between the rows.The stem cut can survive up to 1 month without planting. When using cuttings, the initial growth of the aerial part is fast, but that of the roots is slow. After four months of being planted the growth accelerates reaching up to five meters of height.

Stems should be pruned after the second harvest to a height of 1.5 m. This is necessary because the plant has the capacity to grow between 0.5 and 0.7 cm each day, which can result in a very tall plant which makes it difficult to handle and harvest.
Once its leaves are between 10 and 20 cm. they can be harvested by hand throughout the year. First harvest can be done 6 months after planting and then approximately every two months. For human consumption, fully formed but young leaves should be selected. Usually from the second to the fourth leaf from the apex of each bud. 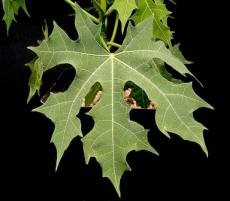 Uses: The important thing with chaya is to cook it well, as it has poisonous components. Whether it is boiling it in water or cooking it with other stewed vegetables, it is necessary to cook it for least 10 minutes.

Chaya offers many advantages because it contains a large amount of vitamins, mineral salts, and trace elements. It regulates blood pressure, improves blood circulation and it is anti-inflammatory in problems with veins and hemorrhoids. It also reduces the level of cholesterol and uric acid, helps reduce weight and increases the retention of calcium in the body. The recommended dose is 2 to 6 leaves per day, blended in soups or salads after being cooked. Chaya is cooked in soups, stews, such as vegetables and used in herbal teas.

Pests and Diseases: Heartworm, and lace bug. This insect feeds mainly on the leaves. Its damage is seen as a discoloration in the form of white dots on the surface. Sometimes dark spots are observed. It is controlled by mixing soap, chili, garlic and castor, applying it directly to the plant.
Puccinia mushroom. It appears on chaya leaves as round spots of orange-brown color.
Stem rot. It can be prevented by taking care of the amount of water in the soil.