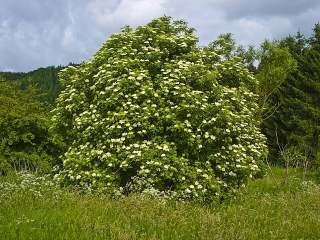 Plant Description: Shrub or small tree four to six meters tall, but significantly broad; it is semi-perennial twisted tree with leathery leaves of light green color. The flower cluster emerges from the central stem, and they are arranged in a false umbel with 5 petals, 5 sepals and 5 stamens with yellow anthers.a The fruit is ovoid in shape (resembling blue-black berries) and dark purple in color develops a waxy white coating as it matures. It grows in a variety of conditions, including fertile soils both wet and dry, mainly in sunny locations. Hedges, roadsides and forests are the typical habitats of the species.1

Cultivation: Elder wood is very weak. It should be planted in the area where it has some shelter from the wind or other plants. It grows best exposed to direct or semi-shade sun. Despite its ability to grow in different types of soil, elder prefers when it is well-drained and fertile.

It can be propagated by seeds or cuttings.
To reproduce the elderberry by seeds it is important to give them a cold pretreatment first. Collect healthy seeds. Soak the seeds overnight. Fill a plastic bag with sand and peat. Put the seeds into the mix. Keep the seeds refrigerated for 90 days. Keep them protected until early summer, when they can be planted in the ground.

To propagate by cuttings - select a soft, elastic branch that is starting to harden and turn green to brown. Cut the branch into 10-15 cm long segments. You should get multiple cuttings from one branch. Pinch all the leaves from the bottom two-thirds of the cut. Be sure to leave at least one set of leaves at the top. Soak the cuttings in water for 12-24 hours. Then combine one part peat moss to one part sand and combine it with water until the soil is damp and crumbly, not sodden. Fill a 5-10 cm. container with the mix and stick the bottom third of the cutting into the medium. Secure a clear plastic bag over the pot with twist ties or a rubber band to create a mini greenhouse. Place the cutting in an area of bright but indirect light. Mist the cutting every few days as the soil dries out, and then replace the bag. After six weeks, the elderberry cutting should have roots. A gentle tug should meet with resistance, which will let you know it’s time to transplant.
Select a site and prepare the amended soil with abundant organic matter. If the soil does not appear to be very fertile, add phosphorus or potassium before planting. Dig a hole and bury the cut at the base of the stem level with the ground line. Leave 2 - 3m of space among the berries. To allow a range of 2-2.5 m. of spread for each plant.
H

arvest the berries when they have a white waxy coating and easily fall from the cluster. The leaves are collected at any time of the year; flowers in April-July to be carefully dried in the shade; the fruits are collected in July-December; the bark of the thick branches or the trunk is collected in January-April and dried in the sun. 2
It does not require a lot of care. The tree is drought tolerant, but it is preferable to maintain watering periodically. 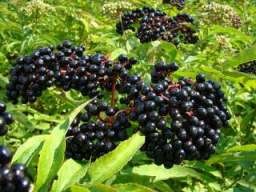 Uses:The fruit is used in syrups, preserves and baked goods. Cooked with honey it is a good immune and antiviral stimulant against cold and flu. The flowers are boiled in tea for fever, cold, flu, and an upset stomach. The leaves and stems are toxic.

Pests and Diseases:Elderberry bushes are generally free of insect pests and serious problems, but can be bothered by some minor illnesses.

Leaf spot - This disease is caused by waterborne fungi that infect the foliage of the plant, causing dark, sometimes greasy spots to appear on the leaves. The leaves can fall prematurely from the plant, or dry and curl. Remove and destroy any leaves to prevent the wintering fungi in the soil from falling. Make sure your elderberry bush has plenty of room around it for air to circulate so the water doesn't sit too long on the leaves. To prevent leaf spot from occurring, spray with water mixed with lime or baking soda once in early spring, then again two weeks later, and again a week after that, if the weather is very rainy.

Powdery mildew - white powder coating that covers the tops of the leaves of the affected plant. This fungal disease thrives in hot, humid conditions, especially if such days are followed by cool nights, and can be spread by the wind from plant to plant. Use natural fungicide to combat it.

Annular spots of tomato can endanger the life of an elderberry bush. This virus is made by nematodes. The virus attacks the roots of the plant, weakening it and preventing the bush from taking in nutrients. In time, the elderberry will die. There is no cure for this disease once it takes over the plant. Avoid disease by planting the tree where tomato plants have never grown.

Botryosphaeria canker, Diaporthe stem canker and Nectria canker - drought, flooding and winter injury can leave elderberry plants open to canker-causing fungi. Cankers appear on an elderberry as sunken wood or flesh on the trunk or stem and wilting or browning of leaves. Prune out infected branches as soon as you notice them to stop the disease' spread, and remove an entire plant if the canker reaches its trunk.3