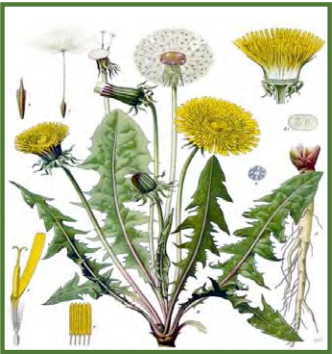 Plant Description: It is a perennial herbaceous plant from 10 to 40 cm high. Leaves are pale greenish-yellow to deep reddish brown; when young they are oval and when adult they are toothed, divided into triangular lobes with the petiole generally on one side. The leaves form a rosette at the base from which hollow, floriferous stems grow that end in a yellow floral head. Each flower is a set of smaller flowers gathered into an inflorescence called chapters. They open when the sun shines and close at night or in the rain. The flowers bear fruit in the form of an achene forming a sphere of white and silky vilanos (set of feathery hairs) that fly with the air, thus helping their seed to spread. All parts of the plant when broken produce a whitish milky latex that dries to a blackish substance.
The origin of Dandelion is Europe (probably Greece) and Asia. But now it grows like wildflowers all over the world. 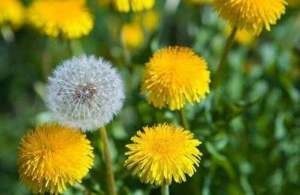 Cultivation: Prepare the place for planting by adding compost to the place where the seed is to be put. Sow in rows with the distance between 5 to 10 centimeters between specimens and 3 millimeters deep. There is no need to cover the seeds with soil as they need lots of light to germinate. Water frequently with enough water to maintain soil moisture. After germination (about 10 days), the plants must be watered every two to three days. When the seedlings develop the true leaves, the smaller seedlings must be removed and the larger and stronger ones left to be grown. During the life of the plant the waterings should be light but constant especially in dry seasons.
Let dandelions grow for several weeks until they begin to produce broad green leaves. The leaves should be harvested when they are less than 25 cm long and before the plant blooms. If the leaves are allowed to grow further they will become bitter in flavor. The leaves can be harvested in late summer or fall by cutting the leaves just below the crown with a sharp knife.

The roots are best harvested in the fall of the first year or early spring of the second year. To harvest the roots, dig the plants with a needle-tipped shovel.

Unharvested plants can be left in the ground to grow the next year. 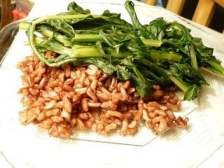 Uses: The entire plant is nutritious and edible. The leaves have many vitamins and minerals. Dandelion leaves act as diuretics, increasing the amount of urine your body produces. They are also used to stimulate appetite and aid digestion. The leaves are used raw in salads or cooked as a vegetable. If they are to be eaten as a salad, young and tender leaves are collected. It is because the mature leaves have a rather bitter taste. Raw flowers are high in antioxidants and have been used for thousands of years to treat inflammation, swelling, cysts, infections, and liver problems. Dandelion can also help improve the immune system.
Herbalists use dandelion root to detoxify the liver and gallbladder. The roots of the plant can be roasted and the flowers can be pressed to obtain wine.
The roots grow to be long and thick and help bring deeper nutrients to plants with shallow roots, and they also add nitrogen and other minerals to the soil. Flowers attract many pollinators, such as bees.

Plagues and diseases: Dandelions have many enemy insects in nature. However, they can protect themselves with latex, a milky, bitter-tasting sap that they produce.
The few bacteria that cause dandelion disease include: Pseudomonas syringae and Agrobacterium tumefaciens. More than 20 viruses are known to infect Dandelion and cause diseases with various symptoms. Aphids and nematodes often participate in virus transmission. Among insects, the pests of pests in dandelion crops can be Tephritis leontodonis caterpillars. These plants feed on a peach and potato aphid (Myzus persicae) and two species of monophages: the dandelion (Dactynotus taraxaci) and the dandelion root (Aphis taraxacifolia). Ginger worms feed on the roots: Weft troglodytes and Weird weft. Erysiphe cichoracearum powdery mildew and rust are a threat to fungal diseases.