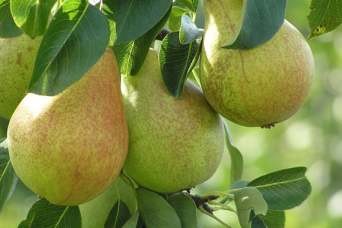 Plant description: A tree in the form of a pyramid, when young it is rounded and over the years it grows to be oval. The average tree size is 10 m high but can reach up to 20 m tall. It lives 65 years on average. Its gray trunk is tall, thin, with the bark having cracks. Its branches when they grow have a semi-smooth, green bark and over time it turns gray-violet, with numerous lenticels.1 The deciduous leaves of pear are oval, toothed or whole, they are hard and flexible, smooth, and shiny on the upper side. The leaves are the same length as their petiole. The petiole is supported by a bearing and at the base it has two well-developed stipules.2 The flowers have five petals and sepals; the bases of the five styles are separated. The flowers are white, solitary or grouped in a compound corymb. The flowers do not need pollinators as they self pollinate.3 The tree has a deep root, with a highly developed central axis. Most pear fruits are elongated, narrow at the end of the stem, and wider at the opposite end. Its skin is green or yellowish, it has small, black, non-shiny seeds that come in small numbers. The flesh of the pear is semi-hard or hard, and sweet in flavor.
The pear is native to Europe, North Africa, and Asia.

Cultivation: Sow in full sun on any moderately fertile, well-drained soil. It also grows well in heavy clay soils. Withstands excessive moisture. Established plants are drought tolerant.
It requires a certain amount of winter cold in order to break dormancy in the spring and begin growth and flowering. Tolerates temperatures below -15 ° C. It does not resist much heat.
It is good to plant at least two varieties of pear trees because some pear varieties need to be pollinated to produce fruit. Make sure the varieties are compatible with each other.
It is propagated by seed, cuttings and grafts. The seeds will not create trees or fruits equal to the mother tree. Each seedling is unique. However, the production of seedling rootstocks is quite practical: it is fast, inexpensive, easy to perform and produces a large number of plants.
Propagation by seed: Remove the seeds from the pear and place them in a glass of water. Leave it in the refrigerator for 4 days. After that time discard the seeds that are floating. Drain the water and fill the glass with potting soil. Place one seed in each corner of the cup. Place a toothpick next to each seed to mark its place. Water well and wait 2-3 weeks for seedlings to appear. Transplant the seedlings into a medium pot when the seedlings have four or more true leaves.4 Let them grow and strengthen for 2-3 months. Transplant the tree outdoors when it is warm outside (around 21°C) Sow in a sunny place and where there are not many trees or other plants around. Water your pear regularly. Within 5-8 years pear should be mature and bear fruit.
Propagation by cuttings: to take cuttings use a healthy tree. Select a new cut of wood (green stem) from a 0.5 cm -1.50 cm wide branch’s tip that contains several growth nodes along the stem. Take 10 cm to 20 cm cuttings from small trees and 25 cm to 40 cm long cuttings from large trees. Make a clean cut at an angle of 45 degrees about 0.5 cm below a leaf node. Prepare the pot by filling it with the same amount of vermiculite, perlite and water. Let the water drain before planting the cuttings. Don't make it thick, just wet. Make hole the size of the cutting.
Remove the bottom 1/3 bark from the cutting and place it in water for five minutes. Then dip it in 0.2% of the rooting hormone, gently tapping any excess. Put some rooting hormone in the prepared hole, put the cutting in and firm the soil around it. Leave space between multiple cuttings. Cover the cutouts with a plastic bag making a nod on the top to create a mini greenhouse. Put the bag in a cool dark place. Check the soil by opening the bag every two to three days. If the floor feels dry, spray it with warm water. Keep the growing pear trees of the cuttings moist, but not wet, in order to prevent rotting. In one month the pot can be taken outside in a protected area, out of direct sun, cold and wind. Allow the trees to continue to grow in size so that they are strong. In three months it can be transplanted directly into the garden. The tree will begin to bear fruit in two to four years. 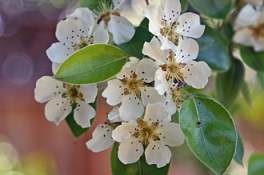 Uses: Pears are eaten as fresh fruit; converted into juice, or cider; are canned, cooked as a part of the main dish or prepared as desserts.
Pears are a good source of dietary fiber, might help protect against the development of type 2 diabetes and heart disease. Pear fruit contains a substance called pectin, which may help reduce diarrhea.
Pears are used for many conditions, such as indigestion, constipation, nausea and vomiting, and liver scarring (cirrhosis)

Plagues and diseases: Codling moth - a larva that damages the fruit. Larvae either “sting” fruit, boring only a short distance into the flesh, or bore into the core of a fruit (deep entry). A deep entry results in unmarketable fruit because the larvae enter the core and consume the seed cavity. Codling moth only develops between temperatures of 10°C to 30°C. Control by planting plants that attract wasps; use of light traps; use of traps with water and molasses; elimination of fallen and damaged fruits burying or burning them
Fruit fly - Damages the skin of the fruit creating small dots where any disease can enter. It also damages the inside of the fruit. Control by collecting fallen fruit, to remove one of its food sources from the plague. The fruits are buried more than a meter deep or they are burned. The movement of leaf litter and surface raking of the soil to expose the fly's pupae to the action of its natural enemies such as birds, toads, among others. The use of homemade traps. Make 4, 1/2 centimeter holes in the top plastic disposable bottle. Add a solution of three tablespoons of diammonium phosphate per liter of water. It must be renewed every week.5
Powdery mildew - this disease is caused by a fungus. The main damages caused by this disease have to do with the reduction in the capacity of the leaves of the plant to capture the energy of the sun and the decrease in the quality of the fruits. To control the disease, prune the plants and use sulfur in wettable doses of 1kg. per water cylinder. Spraying the mix of water with sodium bicarbonate over the affected leaves may help to stop the mildew.