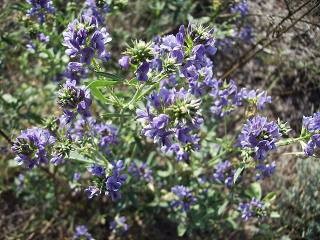 Plant Description: It is a perennial, herbaceous, vivacious, and branchy plant that grows up to 1 m in height.The plant has a woody base 30–80 cm long. From this base grow several types of stems from these that crawl on the ground, the ones that ascend and others that are erect. The stems at the bottom are round, and more or less angular towards the top, and they are generally smooth. Each cluster contains ten to twenty purple flowers in ordinary legume form. The flowers are in a short, somewhat one-sided cluster and resemble clover in appearance. The leaves, which are alternate and scattered along the stem, consist of three leaflets like those of clover. The leaflets are quite narrow, two or three times longer than they are wide, and jagged on top. The middle leaf has a short stem. Alfalfa has a very deep root system between 2 to 5 m but reaches up to 15 meters deep, which makes it tolerant against drought. 1
Alfalfa was first cultivated in Iran. Over time its cultivation spread to Greece and China, Europe and the Americas where it was brought as food for horses.

Cultivation: It is resistant to heat, cold and drought. It grows in full sun and on the soil that is a level, bottomland site that does not have potholes. It does not thrive in mountainous locations, rocky terrain, shallow or eroded soils. It adapts to different types of soil but cannot grow in the soil with much acidity. It needs well drained soil.
In colder climates alfalfa can be planted in the spring, while milder regions in the fall. The amount of seed that needs to be planted depends on the climate, soil and other conditions. In a good climatic condition, less quantity of seeds is necessary. And in adverse conditions, the number of seeds must be higher.

It is important to choose a well-drained site. When tilling the soil, make sure that the beds are firm and smooth at the same time. Since alfalfa roots grow quickly, it does not require deep planting. Simply sift the seeds evenly into the soil and lightly cover with soil itself. The spatial rows should be between 30 to 60 cm. The seeds will sprout within 7 to 10 days. Once the seedlings have reached approximately 15-30 cm, they should be watered as necessary to avoid overcrowding problems.

Alfalfa requires very high amounts of phosphorus and potassium for its healthy and abundant growth.2 So it is important to fertilize frequently with organic fertilizer. Alfalfa requires frequent weeding as weeds can reduce plant yields and quality.
If planting alfalfa for cattle, it will have to be harvested before early flowering. The reason for this is that animals cannot digest the mature plant. Harvesting at this stage also ensures the most optimal nutrient percentages, found in the leaves of the plant.

For quality dry feed for livestock, it is important to harvest the first cut in the late bud stage to the first flower and subsequent cuttings at intervals of 32 to 35 days until the end of August or the beginning of September, often referred to as a “4 summer cuts". 3 Cutting should always be done above the new shoots that sprout from the crown. It is due to the fact that the growth point of the legumes is at the tips of the stems, and cutting them will severely delay the next growth. Once cut, the alfalfa is placed in one meter wide strips where it is dried in the sun. When it is dry enough, the hay is raked and packaged according to the packaging method of each region, and stored as hay, silage, pellets or cubes.

For human consumption allow the plant to grow until its purple flowers appear, at which point you can simply cut it; or wait until it falls to the ground and leave it there. Alfalfa sprouts will decompose. This natural fertilizer fertilizes the soil and will stimulate microbial activity, then aerating the soil.

Quality alfalfa should have a vivid green color, a pleasant and fine aroma, and the stems should be flexible.
Do not cut alfalfa if it rains, as this can damage the crop. Rainy weather can lead to problems with mold. Once harvested, the soil will have to be turned before next sowing season takes place.

Important note: Alfalfa’s property of self-toxicity makes crops not grow in existing stands of alfalfa, therefore, it is recommended to cultivate it in rotation with other crops. 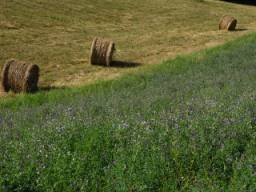 Uses: Its leaves and sprouts are used for consumption. It is also being dried and made in the form of powder.
Helps with inflammation of the bladder. It is used for weight control. Regulates diabetes, improves the respiratory system, reduces blood pressure and cholesterol level, serves as a treatment against anemia. It favors the digestive system and helps with heartburn and indigestion. Relieves menstrual discomfort. Useful in treatment for peptic ulcer.
It is used as livestock feed.
Alfalfa's extensive root system nourishes both plants and soil. It is ideal for providing erosion control. It is also used as a cover crop and is highly nutritious and a natural source of nitrogen making it an excellent soil conditioner.

Pests and Diseases: Implantation diseases, caused by fungi of the genera Pythium, Phytophthora, Rhizoctonia, Fusarium, result in failure in the emergence of the plant or death of seedlings post-emergence (damping-off). Occur during plant establishment (excess rain, moisture, low soil temperature).